So, it’s official. The insurance company totaled my Beetle. 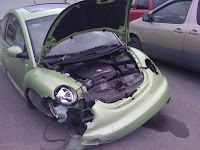 The Beetle was a good car, and I’m sorry to see it go. But it wasn’t perfect. It was a bit too small in the back for passengers. Two doors aren’t as convenient as four. And it was seriously behind in cupholder technology.

So instead of heading right back over to Volkswagon, I’m shopping for a new car. I’ve long been annoyed by the lack of feminine cars on the market. Everything always looks so generic, and every car seems to be available in just red, blue, dark blue, black, silver, and white. Why not jade green? Champagne? Pink, or maybe even purple?

As with a diamond, I’m interested in the four C’s. Not color, clarity, carat, and cut. But these:

(The carseats are for my as-yet-nonexistant children. Specifically, I’m looking for a car that can hold at least two of them.)

The first one I tried out was a Toyota Yaris. From the cutesy name, the bubbly body, and the whimsical commercials, I had concluded that the Yaris was a car designed specifically to appeal to women. About time.

The trouble is, it’s a car made for women, designed by men. I can pretty much tell you how it all went down:

And thus the Yaris was born.

There are about fifty million secret little cubbyholes scattered across the dashboard. Ok, seriously, there’s about seven. And while I can stash my sunglasses in one and a hairbrush in another, at some point I run out of little things to stash. Hey, Toyota: How about a drawer under the back seat big enough to fit a blanket? That’s a cubby hole I’d love to have in a car.

The Yaris just felt all… stupid inside. The silly little cubbies weren’t exactly a problem, but I felt they kind of indicated a lack of effort on the part of the designers. Like they just came up with a single idea and ran it through production without ever bothering to polish it, or even ask themselves if it was a good idea. Another area where this was evident was the speedometer, which was located above the center of the dashboard rather than on the driver’s side so it would be “easier for me to see.”

So we left Toyota, to the great despair of the salesmen who badly wanted to make a sale. And headed over to Honda. 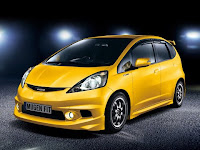 Getting a look at the Honda Fit after driving a Yaris was like picking up an I-Phone after spending all afternoon dealing with Windows Vista. Like an I-Phone, the Fit just had an aura of pride in workmanship and attention to detail. Despite being little and cute, it will carry plenty of cargo — you could even stow some blankets under those rear seats! And it’s definitely a woman’s car — heck, it comes in purple!

So I think I’ve found my car. I’m skipping the purple in favor of a very bright, flirty blue, but I feel good about the fact that I’m buying a car that must have been made with women in mind. Whenever I see a new prodcut I think is a really great idea, I like to buy it if I can — that way the manufacturers know they’re doing something right, and if you’re really lucky eventually the rest of the industry catches on.