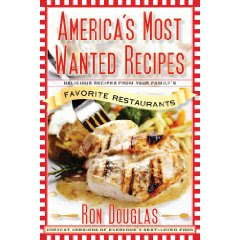 The other day at Borders I was browsing the tables up front and came across this interesting find: America’s Most Wanted Recipes.

It’s a collection of recipes from popular restaurants, like Chili’s, the Olive Garden, and KFC. What a great idea, I thought.

Because it is. An interesting book, one that should appeal to a lot of people–even people outside the normal cookbook market. A good seller.

I flipped through the table of contents and found exactly one recipe I really, really wanted: Chili’s salsa. And then I did a thing that I perhaps should not have done:

I copied it down.

Ok, yes, I know this was wrong. But it was literally the only recipe I wanted. And after I went home, I made a discovery. The recipe was very, very marginally different from this recipe, found all over the web:

1. Pulse fresh vegetables in food processor.
2. Add everything else and process.

This information cast a new light on America’s Most Wanted Recipes. Was it possible that the author didn’t actually develop the recipes for the book? That instead he just copied info from the web, tweaked it, collated it into a nice format, and sent it off to be published? I don’t actually know how true this is, of course–I only read one recipe–but it seemed possible.

When I encounter something like this, I feel slightly… irked, even ripped off–as though the author were cheating at life. Hey, what gives, I want to say. Why do you get to be in the front of the bookstore?

But then I have to slow down, climb off my high horse, and remember that:

By putting together that book, the author brought those recipes to a new demographic, the demographic of people who doesn’t search the web for copycat recipes, but might be interested anyway. That’s valuable. And if he can earn some money from that, well, he deserves it. But it doesn’t really even matter if he deserves it because…

There’s no reason in the world for me to feel jealous or annoyed when somebody else thinks of a good way to make money–or publication, or critical acclaim, or any of the other things I sometimes get jealous of. Even if it seems to me that what they’re doing doesn’t have value, or that their effort was not commensurate with the reward–well, who cares? Why should I begrudge them their success? The bottom line is: I shouldn’t. An the end of the day, they’re them and I’m me. I can find my own way to success and be happy for them too.

Once I got my head on straight, I took a look at my purloined salsa recipe. It was darn easy; apart from chopping a few meager veggies (which I like), and cleaning my food processor, there was basically nothing to do. I whipped it up and tried it. It was good.

But it wasn’t just right.

I let the flavors meld overnight, but it still didn’t taste like Chili’s to me. So I packed some up in a ramekin and decided to taste test it against the real thing. 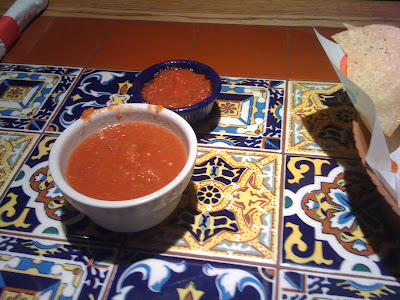 For those of you who knew me pre-2002, you’re probably thinking, “Hey! What’s going on here? Jane hates salsa!” The truth is, Mark’s been training me up: first on chili, then salsa, and now we’re up to crazy things like chicken wings. So I was excited to see how close I had come to the real thing.

Just from the picture you can see a few differences. Mine is chunkier. Also, they didn’t seed their jalepenos, and I did. (like I said, I have a history as a spice wimp. I panicked.) Also, their chunks of pepper are a softer, more mossy green, meaning that they were cooked rather than fresh.

But the real differences were in the taste. Chili’s salsa tastes miles more fresh and spicy. After a bite of mine, I can distinctly taste garlic and cumin, whereas the Chili’s seasoning was more of a piece with the whole dish. Theirs was also much brighter; I wondered if it might contain some lemon juice. Mark thought it might have hot sauce.

So, the upshot is that we have a laundry list of things to try with the next batch. Roast the peppers. Leave the seeds. Try hot sauce and lemon juice. And Mark’s interested in trying some other peppers, not just jalepenos.

I believe I can conquer that salsa. Just give me time…