OK, you already knew that the web was awesome, right? But perhaps you don’t truly appreciate the depth of its awesomeness. Like how you can get from one teensy granule of information to the exact knowledge you’re seeking.

I was looking for a paragraph. Just a random graf, from a random page in a random novel that I read when I was in high school. It was from a fantasy, and concerned the protagonist’s freshly cast spell — how she could sense the spell’s fullness and rightness and completeness. The idea of the graf had always stuck with me, but after seventeen-or-so years, the actual words had faded from memory. I only had one scrap left: if she had tapped it with her nail, it would have rung like a bell.

I typed that phrase into Google, but I didn’t get any relevant hits. It’s just full of too many generic words (though Google helpfully suggested that maybe I meant “if she had taped it with her nail.”) Moreover, I wasn’t sure I had the exact words; like I said, it had been awhile.

The next step was to look for the book itself. I remembered that it was a fantasy, I remembered the plot, and I remembered that there was a red-headed girl on the front in a purple dress.
After scouring my brain, I remembered that the protagonist was a magic user referred to as “mageborn” and that one of the minor characters was called “Alix.” I was worried that both of these search terms would be too common (I’m sure more than a few books use the word “mageborn”), but a simple search for “mageborn Alix” returns several results for Barbara Hambly’s Stranger at the Wedding. 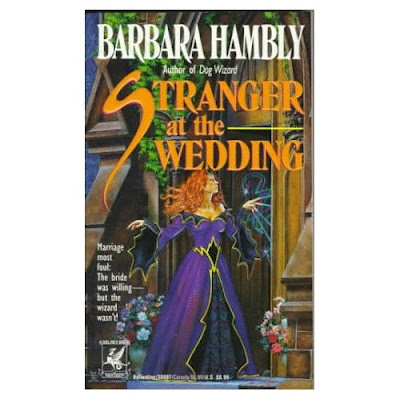 At this point I considered just buying the book. It is out of print, but there are used copies available on Amazon, and I remembered greatly enjoying it as a teen.

Google doesn’t let you see the whole book unless it’s out of copyright or the publisher has granted permission. But it’s a fun place to bum around, and if you don’t believe me, try paging through a few old Life magazines from the thirties. The ads alone are delightful.

So I searched for “Stranger at the Wedding,” then searched within it for my one key phrase: “if she had tapped it with her nail, it would have rung like a bell.” After a few variations, I hit on it. But I still didn’t have the whole paragraph! Google would return a few lines at a time, but they didn’t have permission to reveal a large excerpt, so I was left with fragments. After several minutes of playing around I had the beginning of the paragraph, and the end, but was missing a few words from the middle.

The final step: I took those opening words and typed them into a regular Google web search. And found myself directed to Scribd.com.

Scribd is a self-publishing webstite; I’m guessing that after Hambly’s publisher let her book go out of print, she turned to Scribd so she could continue to sell it. Interestingly, in the Scribd version, Hambly has edited out the final phrase, the one phrase I remembered for all these years, the phrase that enabled me to start this search in the first place. But when I put the Scribd text together with the Google Books text, I finally had the graf I was looking for:

To her inner perception of magic, the spell felt hard and smooth, like blown glass cooled perfectly to its final shape; if she had tapped it with her nail, it would have rung like a bell.

And now that I see the thing in its entirety, I remember why it stuck in my head for so many years. This is exactly (exactly!) what I am always trying to achieve with my writing. Not for my writing to feel like Hambly’s, but for it to feel the way her protagonist’s spell felt: solid and cohesive and unblemished and resonant.

I can imagine my nails running over that blown glass she’s talking about, feeling the smoothness, how there’s nothing on that surface that catches or snags. In my head, the glass’s final shape is a sphere, and when I imagine tapping it I can almost hear the chime.