When 2000 rolled around it was, if you’ll recall, a big damn deal. I’m talking pomp and circumstance, and dancing in the streets. Remember… hee hee… Y2K? I was just twenty-two, spending a good chunk of my time resenting my awesome job at a newspaper because they expected me to spend so much more time on it than I’d ever had to spend on college.

And then here it was: 2000. A big freakin’ number that said clearly that we were moving forward into the future, that this was a Day to Be Marked. It never honestly occurred to me that I’d even be seeing New Years Eve 2010. I mean, I expected to, but only in the way that you expect to die someday. It was a length of time I really couldn’t envision.

But here I am. And I’m a different me. In evidence of which, I offer these pictures. 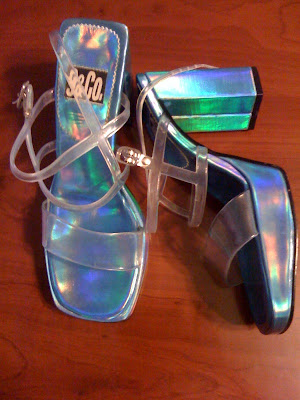 These are the shoes I wore on New Year’s Eve 2000. I wore them around downtown Fort Worth, in the midst of a rockin’, rollin’ Texas-style celebration. They hurt my feet, my toes nearly froze off, and I spent all night worried that I’d scrape through that thin sheen of blue to reveal the papier mache or whatever was underneath.

And here are the shoes I wore this year: 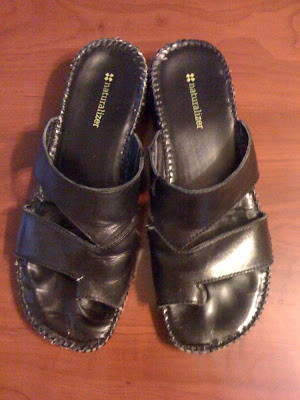 I wore them in my living room, while Mark and I watched a Burn Notice marathon, then switched to the Times Square ball drop for the last five minutes. We toasted with half a can of Coke apiece, kissed, spoke of our undying love and fidelity, and then got back to Burn Notice. Full disclosure: I was also wearing socks at the time.

That’s how my life has been, but much more on the better side than the worse. I’ve got a decade less of life to run with here in 2010, not to mention fertility and facial elasticity. But I’ve also got a husband and a life I love. And I think (I hope) I’m more a bit wiser now, a bit more generous, more patient.

What I’m not, and what I would have expected to be by now, is finished.

I’m not finished figuring out how to be the person I want to be. How to be disciplined, and courageous, and stylish, and organized. Nor am I established in my career. By any measure, I’m farther along than when this millennium started, but I am not there.

And because I’m 2010 me, and not 2000 me, I’m old enough to know that maybe you never really get finished. Maybe it’s all really about the journey

Or maybe that’s malarkey, but here are a few things I know: